The methods to obtain judicial assistance in Japan for foreign proceedings vary depending on the existence and contents of the bilateral or multilateral conventions between Japan and the foreign states at issue.

In the event of a state that is not a party to these Conventions requesting Japan’s judicial assistance, Japan responds to such request in accordance with relevant domestic law; namely, the Act Relating to the Reciprocal Judicial Assistance to be Given at the Request of Foreign Courts. *5 Such Act stipulates that, at the request of foreign courts, Japanese courts shall provide assistance in serving documents, etc., provided that the request shall, inter alia, come through diplomatic channels. *6

Art. 5(1) of the Hague Service Convention provides two methods – (a) a method prescribed by the laws of Japan for the service of documents, and (b) a particular method requested by the applicant. The latter method can be carried out unless it is incompatible with the laws of Japan.

An appropriate authority or judicial officer in a contracting state to the Hague Service Convention can make a request to Japan’s central authority to serve its judicial document in Japan in accordance with Art. 5(1). Japan has designated the Minister of Foreign Affairs in Japan (“MOFA”) as its central authority which accepts incoming requests for service. The request must be written in English, French or Japanese.

As shown in the chart below, upon receipt of a request, MOFA refers the document to the Supreme Court of Japan and the document is then forwarded to a district court in Japan that has jurisdiction over the addressee. Where the document to be served is a complaint, it will be served via the district court using a process called tokubetsu-sotatsu which is a special type of court mediated service by mail. 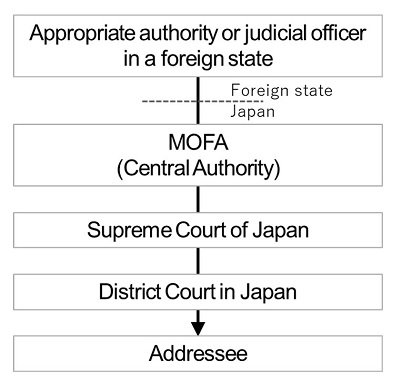 It must be emphasized that the MOFA requires full Japanese translations to be attached for any document to be served in Japan. *9 However, even if some parts of the documents are not translated, the documents can still be served as an informal/voluntary service pursuant to Art. 5(2) of the Hague Service Convention unless such service has not been intentionally deleted in the request form.

Furthermore, under Art. 5(2) of the Hague Service Convention, a judicial document may be served by delivery, with or without its full translation, to an addressee who accepts it voluntarily.

In such case, a court clerk at the district court uses regular mail to notify the addressee of the document to be served, and the addressee can accept it by appearing by itself or through its proxy or request the court to forward the document. In a case where the addressee fails to respond to the court within three weeks from the date of notification, the informal/voluntary service is deemed to be refused. When the informal/voluntary service is refused, the request is returned unexecuted.

■Direct service through diplomatic/consular channels or by mail

Direct service through diplomatic/consular channels or by mail is not available in Japan.

As stated above, service of process in Japan can certainly be said to be feasible (with some patience). It should be noted, however, that a served process does not necessarily result in it being easier to enforce foreign judgments in Japan, and Japan is not a party to any bilateral or multilateral treaties regarding reciprocal recognition and enforcement of foreign judgments, such as the Hague Convention on Recognition and Enforcement of Foreign Judgments in Civil and Commercial Matters.

A judgment rendered by a foreign court can be recognized in Japan (without the need for a separate procedure) if it satisfies the requirements of the Code of Civil Procedure (the “CCP”). *13 In order to enforce a foreign judgment, the proponent must obtain an enforcement judgment before a Japanese court and then file a petition for compulsory enforcement based on such judgment. A final and binding judgment rendered by a foreign court is valid in Japan if it meets all of the requirements prescribed in the CCP. One of the requirements is that the defendant has been served (excluding service by publication or similar means) a summons or an order necessary for the commencement of the suit or has appeared without receiving such service. *14

As summarized herein, formal service under Art. 5(1) of the Hague Service Convention requires full Japanese translations of a complaint and summons and direct service by mail is no longer available in Japan. Accordingly, it could be significant for a plaintiff who has brought a lawsuit before a foreign court against a Japanese entity to have negotiations wherein the defendant appears before the foreign court without receiving such service or voluntarily accepts the judicial document under Art. 5(2) of the Hague Service Convention, in exchange for giving certain advantages in favor of the defendant, such as an extended time period to respond to the complaint.